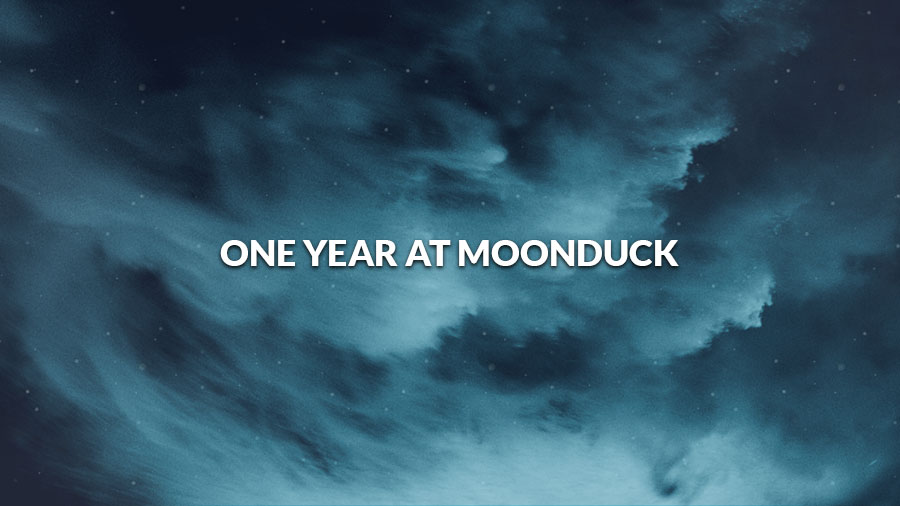 This was a big year for all of us at Moonduck. We started this venture nearly 1 year ago as a pipe dream, with the vision of bringing together individual talent under one studio umbrella whilst allowing everyone the freedom to work on any projects they want- even with competing studios. Our vision posed a lot of challenges, but after a year as a company we’re already in the green and moving in an upward trajectory.

Starting a virtual broadcasting studio seemed straightforward enough at it’s inception, but running an actual business had a steeper learning curve than we expected. It took us a period of trial and error to establish a strong vision for the organization and build a sustainable business model. The tournament space in Dota changed a lot this year with the implementation of the majors system, but it seems this next season will be stronger than ever with more third party tournament organizers stepping up to the plate.

Now that it’s been over a year since I started focusing on Moonduck full time, it felt like a good time to share some of my thoughts about road bumps we hit and milestones we crossed.

This year we’ve hit several milestones, but the first that comes to mind is Captain’s Draft 3 and the playoff coverage in particular. CD3 was the first event we did completely in house with control over every aspect of the tournament and production. We wanted to do something special for the playoffs and opted to fly all of the casters and producer on location so we could create extra content, as well as change it up from our standard online production. It seems obvious now but at the time it was a huge financial risk, and if we had some kind of cataclysmic failure it could have detrimental to the future of the studio.

In the end the event went off without a hitch, and it opened a lot of doors for Moonduck in the months to follow. The event brought all of our talent much closer together, and for the first time we could all feel the bond we had been building through digital pipelines. Working in a virtual environment isn’t always easy, and it was really important for us to finally centralize around something we created as a team.

Part of our vision has always been to cultivate new talent, and that came to fruition this year when we brought on two new team members in July. Though Annie and Trent have only been with Moonduck for a few months, they’ve already been instrumental in our coverage plans as we move forward. Timing is everything when it comes to bringing on new talent, but we’re excited to continue diversifying our skills as a team.

It was also a big year for a few of our talent that started this venture with us, especially Slacks and Maut. This time last year Slacks was still unproven talent that was sneaking into events to create content that no one else was doing; fast forward 12 months and he’s in Seattle hosting an allstar match with Kaci Aitchison. It almost feels weird to have a big event now where Slacks isn’t somehow included.

Maut has also had an amazing year, graduating from grinding online match after online match to finally getting a shot on the main stage of a major lan. He did well at the Manila major, but got a chance to prove himself again with the lower bracket finals on the final day of TI. It’s a huge accomplishment for any caster, and we’re happy to see how far our talent have come only a year into this thing.

It’s insane to think that after only a year we are moving into a hybrid house/studio with the Moonduck logo on it. We started this project with the clear terms that no one would be required to relocate for the company, so it seemed grim that we could get enough people for a house in the near future. I’m really excited to start a new adventure with Annie and Maut; having a location already will make it easy to run events like CD3 in the future.

Our merch presence has not been up to par. One of the reasons we chose such an adorable little hippo for our logo was to turn him into the cutest plushies, pins, and shirts you’ve ever seen, but finding the right distributor has been more difficult than expected. Simply we put, we don’t want to sell generic crap with our logo on it. Finding someone that can help us bring all of our wild merch ideas to life has been way harder than we thought.

It’s incredible that we’ve built such a fan base around What the DUCK? that most of social media is flooded with requests for more episodes. We’re actually pretty proud of that content, but I think it’s easy to underestimate how hard it is to pull episodes together. Our top talent are constantly traveling the world, working on different zones, and committed to other obligations that make it nearly impossible to schedule the show in regular intervals. It’s also hard to force that kind of content; it really relies on relevant news topics to drive the conversation. Moving forward we have plans to fill the gap between episodes with more consistent content from the house in the form of casual streams and youtube shorts.